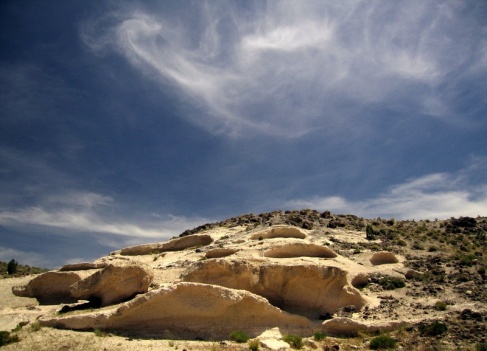 Speaking of locations, another important setting for the novel is the desert.  Above, the first image came from Utah, a place I journeyed to in preparation for writing the final chapters, which unfold in the wasteland west of Salt Lake City.  The second image comes from the Arabian desert.  One idea that links the two is that my male protagonist could simply not escape his appointment in this archetypal landscape, even by fleeing around the world.

What does it mean?  You’ll recall that Jesus spent forty days there following his baptism by John, and was visited by the Devil.  Many of the western Native American mythologies are set there.  And Hollywood continues to dip its toe in the sand, as seen in the recent Transformers and Pirates of the Carribbean sequels.

For me, the Desert signifies the stripping down of life, to its bare essentials: technology fails, civilization stalls, and struggles of ego give way to struggles for existence.  It’s where people confront the illusions they’ve lived under, by having them stripped away.  Bodies and minds fail there, too, of course.  But this makes it the ultimate arena for trials of the spirit: deprived of the usual distractions–luxuries, money, time, even food and drink–a person finds what, if anything, is left of himself.

Short Audiobook sample of Clotho’s Loom, read by the Author (forthcoming in 2012) on YouTube

Telemachus and Homer by Scott Locke. $2.99 from Smashwords.com
For every boy who grew up in his father’s shadow and every girl who has been underestimated, there comes a time to look within themselves to see if they have the strength to meet the challenges of the lives. Together, Telemachus and Homer, the people of Ithaca’s last hope, begin their quest.

Undercover Agent; How One Honest Man Took on the Drug Mob...And Then the Mounties by Peter Rehak. $4.99 from Smashwords.com
It was North America’s biggest drug bust, worth $238 million. The man behind it was a small-town businessman who fooled the Miami drug barons who were setting up a pipeline into Canada. Leonard Mitchell worked undercover for the RCMP for 19 months because “it was the right thing to do.” He was successful but it earned him a lifetime run from the mob and he also had to take on the Mounties.

Law of Attraction is only the tip of the Iceberg: Advanced Metaphysical Concepts for Illuminated Living by Reginald Martin. $2.99 from Smashwords.com
The Transmutation Method is powerful concept! With so many teaching LOA contradictions arise.Get to the basics of metaphysics, develop intuition, then build on this foundation. Learn simple yet powerful and practical ideas that will change your life! Live a life of joy, inspiration and excitement through these advanced ideas. Connect mind, body and soul in the way you were designed to live life!

All images are property of their originators, and are used under that understanding. Please contact the site administrator for any potential infringements.

Subscribe and Auto-Share this blog’s posts by joining Indie Writer’s Unite! on Triberr

See the giveaway details at Goodreads.